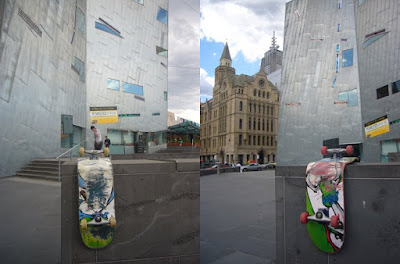 "The Federation Square Skateboard Series 2008" Jason Waterhouse. Nov. 2008 Ajr
There seems to be a belligerent streak to my nature that rather enjoys seeing some of our more ‘subversive’ cultures – graffiti/street artists and skateboarders for instance – making public statements and stirring up the status quo. So it was predictable that I would relate well to “The Federation Square Skateboard Series 2008,” by Melbourne artist, Jason Waterhouse. His is another of the ten works – finalists - currently being exhibited as part of the Melbourne Prize for Urban Sculpture 2008. Like graffiti, skateboarding is something of a thorn in the side of urban planning organisations but try as they might, they rarely seem able to quell either activity for long. Creativity will always have its way. Jason Waterhouse’s work makes that very clear. His coloured boards are placed throughout Federation Square. www.melbourneprizetrust.org www.jasonwaterhouse.com For other finalists click on Melbourne Prize for Urban Sculpture in the label line below.
Posted by Adrienne Rewi at 7:01 AM