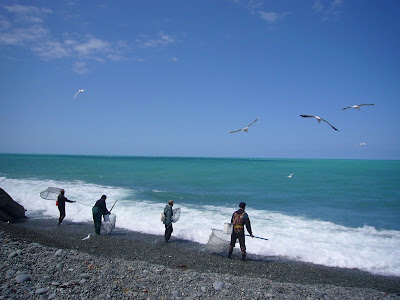 Waihao River Mouth, South East Coast. Nov. 2008. Ajr
This is where I have been for much of today - at the Waihao Marae and Waihao River Mouth, about three hours south of Christchurch. It was all in the name of work - another kai (food) feature for Ngai Tahu's Te Karaka magazine......This time a look at the abundant of kaimoana (seafood) found in these parts. After lunch at the marae, cooked by Ngai Tahu chef, Jason Dell, who works as executive chef at Blanket Bay, near Queenstown, we headed for the river mouth to check out the whitebaiters. They were working hard in dangerous seas but it appeared to be worth it. They had bucket-loads of these little fishy delicacies.
Posted by Adrienne Rewi at 9:25 PM