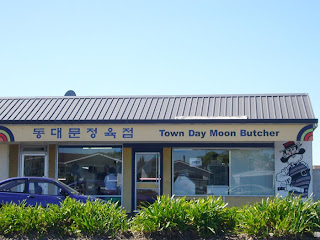 Upper Riccarton, Christchurch. Oct. 2008. Ajr
I slammed the brakes on yesterday to photograph this crazy little Korean butchery in Upper Riccarton. “Just little bit English,” as they say in India – which is also where I found a Jaipur jewellery store called ‘Gemkins;’ a vehicle parts operation called ‘Mother India Motor Parts;’ and hotels named Hotel Ladle, Hotel Decent, Sweet Dreams Resort and Motel Ringleader. In Japan there was ‘Hotel New York Dream’ – complete with Statue of Liberty on top; and the hairdresser called ‘Cut House You.’ I love these quirky little linguistic adaptations; I actively hunt them out when I’m travelling and luckily for me, they’re rampant throughout Asia.
Posted by Adrienne Rewi at 9:37 AM