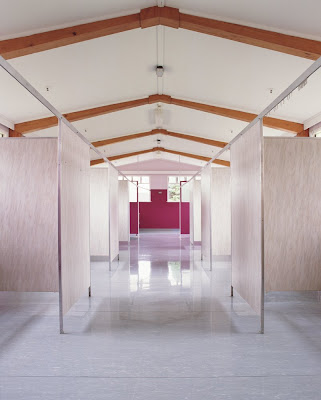 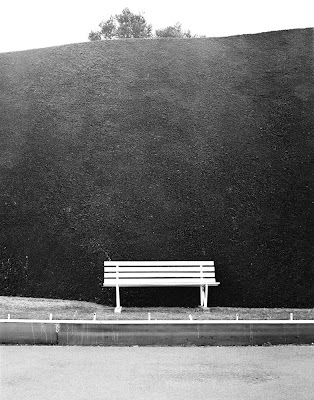 TOP: "Ward #2 2008"
BOTTOM: "Bowling Green Hedge 2008"
Both images by Guy Frederick & supplied by Guy Frederick
Abandoned buildings, ordered environments and social meeting places are among the triggers that stir Christchurch photographer, Guy Frederick’s visual responses. These are two of my favourite images from his current show at City Art called “Human Ecology Study: Part 1,” a show that catalogues Frederick’s passion for “the intricate relationships between people and their environment, and how each influences the other.” The images – all black and white but for three – also clearly hint at Frederick’s training as a scientist with an honours degree in geography. His photographs are pared back, raw, focussing on light and space and the pathways man has made through his landscape. It will be no surprise to many to see I have singled out a giant HEDGE as one of my favourites – no surprise at all; I’m a hedge lover after all! And it’s no surprise either (to me at least) that this wonderful collection of social observations is hiding out in the off-beat, semi-industrial location that City Art calls home. If you like the journey as much as the destination, then this is one trip you should definitely make. The show is on until November 15 at 96 Disraeli Street, Christchurch. www.cityart.co.nz www.guyfrederick.co.nz
Posted by Adrienne Rewi at 6:44 AM

thanks for pointing me to this amazing dude

my feelings are below

He confronts us with the evocative images of abandoned hospital wards and all that they say about us minus the people - its almost as though he is saying, what footprint are we leaving as we go along and what does this say about how we treat each other and about how we relate to our built environment

The clever omission of people from most of his images is a notable adjunct to his magazine portfolio where people are generally the centre of the story. But you can start to see in these exhibition images where the stunning and sometimes challenging bread and butter work of the media world are derived, from a deep, tender understanding of what makes us humans tick.

I for one look forward to seeing this photographer continue to challenge us with his growing body of work...