Yes, Of Course I'd Love To Hold A Big Hairy Tarantula! 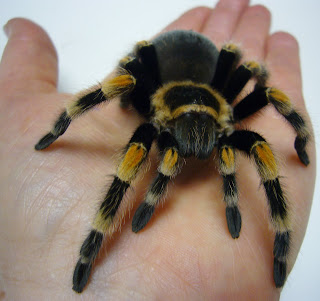 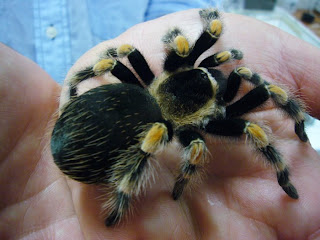 Mexican Red Kneed Tarantula. Oct.2008 Ajr
And I did!
That’s my hand in the top image holding an endangered Mexican Red-Kneed Tarantula! I’ve never been especially afraid spiders but then again, I’ve never been especially keen on them either. But when I visited my friend Simon Pollard at the university I knew there would be a decision to make – would I actually be brave enough to hold the tarantula I knew he would offer me? I spent the whole weekend coaching myself, remembering that he had said tarantulas weren’t particularly venomous to humans – that if I was bitten, it would feel a bit like having a couple of tacks being driven into my hand. That wasn’t an idea I relished but I was prepared to take the risk. And now, having succeeded I can tick it off my list of 101 Challenging Things to Do Before Christmas. That said, I was NOT brave enough to hold the much bigger, meaner-looking Costa Rican Stripe-Legged Tarantula shown below. He scared the wits out of me. He looked like he would happily go straight for my throat! Suffice to say there are limits to my bravado.
Posted by Adrienne Rewi at 7:01 AM