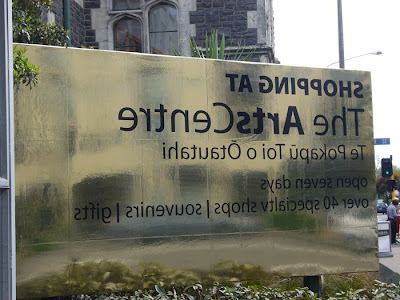 "Every Bag Counts" Ayse Erkmen. Oct. 2008. Ajr
Turkish artist, Ayse Erkmen’s contribution to SCAPE 2008 is, according to the supplied writings “a subtle intervention.” But apart from this shimmering golden billboard on Montreal Street, it’s been so subtle as to be invisible. Erkman has chosen a group of inner-city retailers among whom she has distributed her ‘golden cashier bags’ designed to replace the outlets’ usual shopping bags. The bags are said to bear statements that relate to the function of the business and, once given over to customers, they become “mobile sculptures as they are carried through the city – tracing the routes of shoppers” - just as the SCAPE subtitle “Wandering Lines” suggests. Well, nice idea but I’m not sure anyone has really noticed. I haven’t seen a single bag and I’ve been watching for them. I suspect that, in a world bombarded with smart retail graphics, they have been completely lost. For comments on other biennial exhibits, click on Scape Biennial in the label line below. www.scapebiennial.org.nz
Posted by Adrienne Rewi at 7:01 AM