No, I am Not Related to Rewi Alley 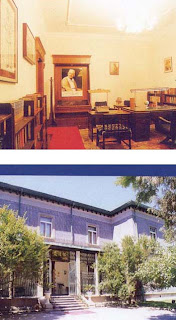 Yesterday I was asked if I was related to Rewi Alley. When I was in China I understood the confusion given the Chinese predilection for inverting christian and surnames; here in New Zealand the question just puzzles me. People seem to see the name ‘Rewi’ and assume we are related, overlooking the fact that his was a christian name and mine a surname.
On my last visit to Beijing I visited the former residence of New Zealand-born Rewi Alley, who gave so much of his life to working in China. Given his Communist beliefs, I imagined Alley living in a modest little backstreet dwelling. I was flabbergasted when I arrived at a large, two-storied stately home. Turns out Alley spent his last 29 years languishing in the grand elegance of the former Italian Embassy. He had not been alone. From the beginning of the 1950s the house, now The Friendship Museum of the Chinese People’s Association for Friendship with Foreign Countries (succinctly, CPAFFC), had been home to five “important foreign friends” including American journalist Anna Louise Strong, Japan’s Saionji Kinkazu, Jose Venturelli from Chile and Robert F.Williams from USA. They each had a large apartment within the mansion. It was a surprise to learn that Alley had sat in his sunny sitting room surrounded by stunning pieces of antique furniture from the Imperial Summer Palace. Large portraits hung on the walls, blue and white porcelain mingled with carved dragons and a crystal chandelier hung above. It is an understatement to say that Rewi Alley is highly regarded in China. He was considered their “number one foreign friend living in Beijing” and his surroundings made it clear that if you were ‘a number one friend,’ you were well looked after. Deng Xiaoping hosted Rewi Alley’s 80th birthday and he was honoured again by the Chinese heads of state when he turned 90. He died in Beijing in 1987 and his ashes were spread in Shandong, where he had spent much of his time establishing a technical school. When I left Friendship Museum, it was without a concrete impression of Rewi Alley. I wasn’t sure who I had ‘seen.’ Certainly I had a sense of the elderly, sociable, number one friend of China’s elite; but a vision of the younger, dedicated man who lived in austerity in rural China with the working folk, seemed a much more ephemeral thing. From ‘Travels in Beijing, a manuscript, Ajr
Posted by Adrienne Rewi at 5:51 AM