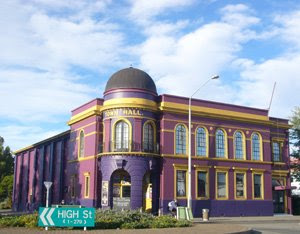 Rangiora, March 2008, Ajr
Am I mistaken or have the people of Rangiora been a little hysterical in their colour choices? This stately old Town Hall cost 10,850 pounds to build and was opened in 1926. It once housed Rangiora’s library on the ground floor and has since been home to The Rangiora Players, a group of theatrically-inclined locals and the Regent Theatre cinema. As vivid and unmissable as it now is, I think there’s something rather chummy and irreverent about this old beauty. I like it a lot – and it took me five circles of the roundabout before I could stop in the middle of the road to get this photo without irate locals tooting at me.

Posted by Adrienne Rewi at 4:37 AM