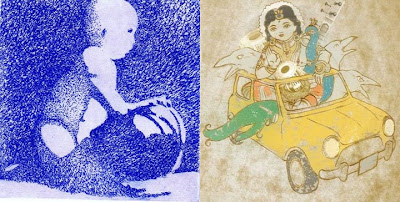 Left: "The Boy and the Tabla"Barry Cleavin, 2008; Right: "Ta ki ta ki ta ta ka" Chaim Cleavin 2008
Get ready for the best ‘fine art’ buy on the market folks! Further to yesterday’s post about the Spirit of India Concert Tour, I have heard of further exciting enticements –a chance for Dunedin and Christchurch audiences to acquire one of only 20 limited edition folios of four signed and numbered A4 digital images by leading New Zealand artists, Barry Cleavin, Denise Copland, Philip Trusttum and Chaim Cleavin, with frontispiece (5 images in all) for $100. Yes, you did read that right! Just $100. The collection – entitled “A Visual Offering” - has been conceived, created and printed at The Boojum Press, Christchurch 2008 in support of the 28th Spirit of Indian Concert Tour of New Zealand by Natesan Ramani and Manjiri Kelkar. All proceeds from the image sales will be donated to the Nataraj Cultural Centre, Melbourne in appreciation of executive committee president, Mohindar Dhillon’s commitment to these touring concert performances. It’s going to be a case of first in first served I’m afraid, so Christchurch concert-goers will have to hope that the Dunedinites leave us some of the goodies. Dunedin March 18, Otago Museum; Christchurch, March 20, the Arts Centre. Get to the door early I say! http://www.nataraj.com.au/
Posted by Adrienne Rewi at 3:41 AM