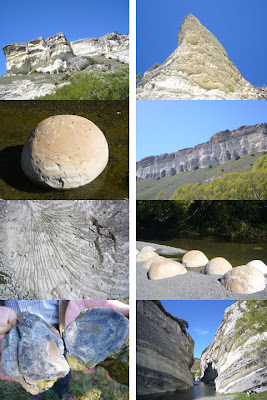 Limestone outcrops and fossils, Claremont Country Estate.
If you stay at Claremont Country Estate in the heart of North Canterbury’s limestone country (see previous post below), you’re in for a big surprise – a free 4WD journey of discovery that will take your breath away. The riverbeds of Claremont Estate are riddled with secrets – hidden pre-historic treasures and more ancient fossils than you can poke a stick at. This is where you can stroke a 60 million-year-old fossilised dinosaur bone on a river bank! There have been amazing discoveries here. In 1872 Alexander McKay discovered the fossilised remains of a Plesiosaur (now in Canterbury Museum); and in 2004, a one-metre Mosasaur skull was discovered. Over the years, more than 134 vertebrate remains have been removed from the property for study. I was most intrigued by the huge spherical boulders – ‘God’s Marbles’ – that are found along the banks of the Waipara River. These 65 million-year-old limestone spheres, 1-2 metres in diameter, have evolved around fragments of dinosaur bones and over a period of about 4 million years, have grown like pearls to the size they are today. Over 230 of them have been removed from Claremont and shipped to museums around the world. This tour was one of the most exciting things I’ve done – totally breathtaking and all very “Jurassic Park.” I half expected to walk around a limestone outcrop and come face to face with Sam Neill and a flock of Pterodactyls. With my imagination already in overdrive, perhaps it’s lucky I didn’t. www.claremont-estate.com

Posted by Adrienne Rewi at 7:52 AM