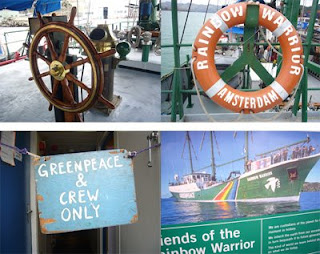 Rainbow Warrior II, Lyttelton Harbour, 2008 Ajr.
Yesterday I drove over to Lyttelton to see the Greenpeace vessel, Rainbow Warrior II – the original having been blown up in Auckland Harbour by French agents in 1985. This one, originally a fishing vessel in the North Sea, was launched in 1989 after being cut in half and extended. The wooden wheel (above) is the only component of the original Rainbow Warrior on board. Unexpectedly, I found myself on a free tour of the boat. It was an interesting experience. For one thing, I never expected to have to produce photo ID – twice – to even get into the port area; and while the video of the crew’s hair-raising ‘activist adventures’ was terrific, I was a little disappointed by the ‘hard sell’ of the Greenpeace staffers, who, having snared their captive audiences, lectured us in environmental issues that we’ve all heard before. Surely anyone visiting the boat is ‘on their side’ in the first place; and how much more interesting it would have been to learn what life is like at sea for the 15 multi-national permanent crew and, at any one time, the 15 activists who join them on various missions. Having seen the video though, I must say I admire their commitment – not for cowardly old me the act of throwing my body between a whale and a harpoon!
Posted by Adrienne Rewi at 6:59 AM