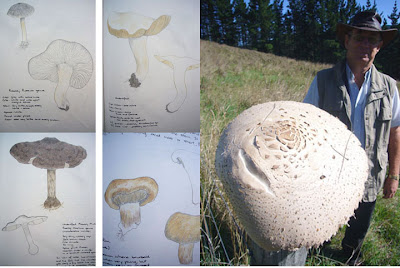 Left: Ajr drawings from "Nature Diary" 1984; Right: Richard Goord of Claremont Country Estate with giant fungi.
Things grow BIG in North Canterbury! Claremont Estate’s Richard Goord found this monster ‘mushroom’ as we travelled around Claremont's 2,400 high country acres in his 4WD vehicle. Back in 1984 I created a daily Nature Diary and many of my entries related to fungi; I studied and drew them endlessly and became quite familiar with many species. However, the mists of time have eroded my knowledge reserves and I am unable to categorically name this fellow. But it’s definitely not a common edible field mushroom (Agaricus campestris) – this I know because it had white gills and an unpleasant smell. Suffice to say I wasn’t prepared to risk eating it!
Posted by Adrienne Rewi at 5:33 AM