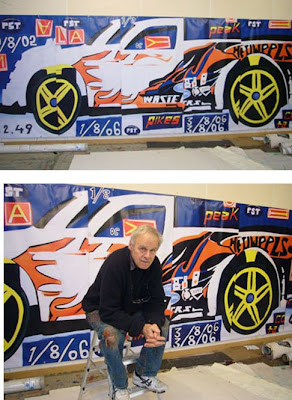 I photographed Phil in his studio in front of one of his huge Truck paintings yesterday
One of New Zealand’s most recognised contemporary painters, Philip Trusttum is ‘going large’ with works that straddle city billboards and a full-sized movie screen. Phil is no stranger to large works of course; his “Passport to the New Millennium” dominated the entire west wall of the Christchurch Convention Centre in 2000, running the length on one city block, taking the viewer on a 94-metre painterly journey through colour, texture and symbolism. Now he’s escaping buildings altogether and, as of May 1st, is displaying three of his (so far) 28-painting series of Trucks (“All What Trucks”) completed over the last 15 months, on gigantic billboards on three of Christchurch’s main arterial routes. At the same time, Hoyts Cinemas in Riccarton will be running a movie clip of the trucks prior to main movie in one of their theatres for two months – also from May 1st scaled down versions of these huge acrylic vehicles will be shown at COCA Gallery, Christchurch in May. It goes without saying that I’ll be photographing the billboards once they’re in place. http://www.trusttum.co.nz/

Posted by Adrienne Rewi at 3:37 AM