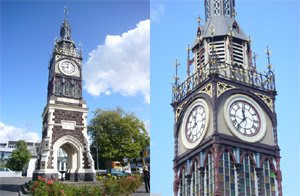 Victoria Street Clock Tower, Christchurch, 2008. Ajr
I drive past the Victoria Street Clock Tower almost every day and it was only recently that I learned of its chequered history. Designed by Benjamin Mountfort and made in England, the tower arrived in Christchurch in 1860 in 147 packages. It was initially installed at the Old Government Buildings in Durham Street, but after just four years it proved too heavy for its support structure. In 1864 it was thus packed away in the council yards where it stayed for the next 30 years. It was re-erected in High Street from 1897-99 to commemorate the Diamond Jubilee of the Coronation of Queen Victoria and then moved again -1930-33 - to its present site in Victoria Street, where its hefty volcanic stone and limestone tower, its ornate iron work and its coloured glass details have become an iconic part of the streetscape. Restored in 2004, it now gleams anew in what we hope will be its final resting place.

Posted by Adrienne Rewi at 3:54 AM