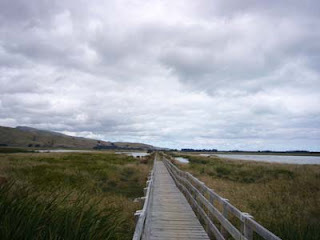 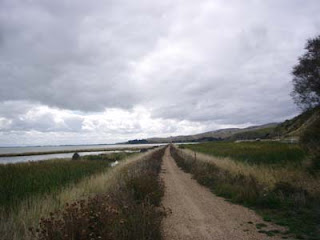 I drove to Akaroa today and was pleasantly surprised to several people making use of the (reasonably) new Christchurch to Little River Rail Trail - a brilliant 'makeover' of the old Christchurch to Little River railway line - last used in the 1960s. Following the old, preserved railway embankments, the first 20-kilometre stretch of the trail between Motukarara and Catons Bay, near Little River opened in May 2006. It’s a bucolic wander, run or cycle alongside Te Waihora (Lake Ellesmere) and its gorgeous bird-filled spread of wetlands, passed Kaitorete Spit - famous for its early Maori settlement and wild beaches - passed Kaituna Lagoon, historic Kaituna Quarry and around the side of Te Waiwera/Lake Forsyth, home to thousands of ducks and black swans. The second section of the trail, opened later in 2006, joins the two country towns of Prebbleton and Lincoln (7km) and runs through pretty countryside taking in the cafes, shops, parks and historic buildings of the two communities. When the entire 44-km trail is complete it will run from Christchurch all the way through to Little River, offering walkers and cyclists a series of ‘bite-sized’ excursions - or one longer challenge - through stunning and diverse landscapes. When I stopped to photograph on the lake edge it was totally silent and a big cloud-filled Canterbury sky loomed overhead. Just magic!
Posted by Adrienne Rewi at 5:04 PM